Who are you Anonymous?

First, I would like to thank you for faithfully following my Reds Card blog that rarely updates. It takes a dedicated inividual to read and reread and rereread various posts.

Second, I would like to give you a new mission in life. Instead of coming here and asking my opinion on video games I don't play. Game systems I don't own. And VG Tournies I will never seek out to enter, I would ask that you concentrate on this guy: 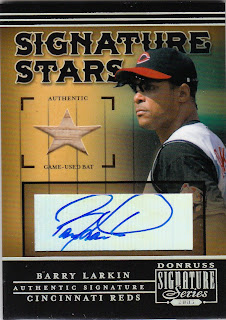 Barry Larkin
See Anonymous, Barry is in his first year of elegebility for the Baseball Hall of Fame. He has a tough road ahead of him to get in on his first ballot. Hawk, Bert, Robby all have legit shots at enshrinement this year. So a measly .300 career batting avg, 2,000+ hits, an MVP, World Series ring, multiple Gold Gloves, Silver Sluggers and being a hometown icon may not matter to voters as much.
Granted I would like to see Davey get in this year with Barry this year but let's get that comment campaign going for our man Larkin! Cause I need more great cards of Barry to add to my collection like the above 2005 Donruss Signature Stars Bat / Autograph numbered to ONLY 25! As you can see Mr. Larkin is daring some schlub named Chipuh to try his luck with a hit baseball in Barry's direction. Add that to the bat used in hiting the game winning RBI and a great sig and we have a classic card.
If you need help Anonymous let me know. Just send me a great comment I can cut and paste and we can get on this!
Posted by Bay Rat North West at 3:44 PM 6 comments: