Today we visit with a future 500 Home Run Club Member.
Adam Dunn.
The card I have selected is the 2003 Topps Chrome 51 Topps Fly Out Jersey Card.
I picked this card up 2 weeks ago at a local (40 miles away is the closest) card shop. For 3 dollars and trade of some commons to help the dealer complete his and my 2007 Fleer sets. So don't be affraid to barter. The sticker had 8 dollars on it. 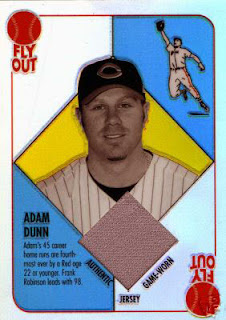 As a fan of the Reds since the early 80's, it's been fun collecting their cards. I still remember the first card I pulled from a wax pack. It was 1981 at Jitney Jungle with my Grandma Helen. A 7 year old begging for some candy and I get a pack of Topps instead. Little did she know the lifelong chase she would start.
The slick feel of the pack, the wonder of what was in there from a new baseball follower. As a Reds fan on the Mississippi Gulf Coast, the only thing I knew was Johnny Bench, Tom Seaver and that they were a long ways away. So who do I see as the first card in the pack? Johnny Bench - All Star! How sweet is that?
From there I pestered parents, grandparents, neighbors for jobs to do for money to buy packs of Topps. Then I discovered a second set! Donruss! More jobs to do for a fire had been lit. Although my first card from a Donruss set was a lowly Mike Schmidt, I did not loose faith I would find my Reds. My Grandfather Red (coincidence?) took pittty on me at the end of summer and called a friend who was a candy didtributor. My birthday present was 3 boxes of Topps Baseball, Football, Basketball, 2 boxes of Donruss and what's this? 3 boxes of Fleer? Sweetness from Heaven! How could he afford all those 30¢ packs? Pa Red was the man now. He understood what I was going through as a new collector. He grew up in the late 30's and early 40's as a Giants fan and sometime collector. Even met Mel Ott a few times when he came to New Orleans.
Since then I have been a set collector. Concentrating on finding Reds cards first and complete sets second. Although I lost it all in Hurricane Katrina, I am back on the hunt and am going to be rebuilding my Reds team set collection. I hope you enjoy as I talk about the cards I find and join in with me. So in Honor of my first post:

What's not to like about this card? The smile, the All-Star Banner, the crisp green border, the red tint to the photo. It screams"I'm the best and I'm a Red!" At least to me.
Although the back lacks lacks cool facts or cartoons, it helps you find out about the man. Born 12/7/47. Same day as my sister. Throws and bats Righty. Just like me. 1974 was a monster season for him. 108 Runs. 174 Hits. 33 Homers. 129 RBI. Too bad the Dodgers were a little better that season. Coulda been 3 in a row for the Reds in the World Series.
Granted the hats on front are a little hokey, but they get the point across.
Posted by Bay Rat North West at 11:34 AM No comments: