After missing the past four Blog Bat Arounds due to the job I decided to join in on fifth one.
Why? 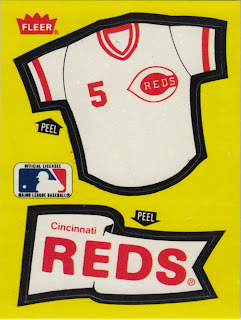 5 is Johnny Bench's Uniform Number.
What is the best experience you have
had acquiring cards or memorabilia?
That is a simple answer for me.

Do I bore you with the story of having my photo taken with said Johnny and The Chicken as a seven year old kid? Nah.

Do you smile in awe about my meeting Cal and Eddie at a 1983 preseason game in New Orleans with Eddie messing up my hair right before Cal signed a ball "To The Squrt - Cal Ripken Jr."?
Blah, blah, blah.

Who wants to hear about the one hour limo ride talking shop with Dale Murphy?
Not Dayf.

My first post told you guys about how I started in collecting.

So hear you go:

The best experience I have ever had in collecting is the day I got the card above. A simple Fleer sticker of Johnny Bench's Uni and a Reds pennant.
Last April 20th I lost all my material things except for the clothes in my weekend pack and my keys. For the second time in just under three years I had lost it all. Another collection down the drain so to speak. What I had managed to gather in the form of Reds and sets after Hurricane Katrina were gone. Again.
It was a sick feeling.

A few fellow bloggers asked why the absence from Cincinnati Reds Cards. I sent emails letting them know. Thanks to you guys who read us and Brad's friends on The Bench, Reds cards started arriving en mass. Four cards here, twenty there. A new bat card from George Foster. A 1992 Billy Hatcher. Dave Concepcion's auto on a Fleer. Plenty of goodies that make Reds collectors all giggly as schoolgirls.

Those cards were a beacon of light as I checked the mail every few days. Seeing that this community has no problem giving (especially cards of teams they do not like) to other colllectors out of the goodness of their hearts still makes me happy. I somehow doubt you guys have a special place in your hearts for a 1979 Topps Dave Collins.

And all of the people who sent some Reds cards should smile and hold your heads high and chest puffed out knowing the cards you sent are now in a loving, happy, Cubs free environment known to me as the Salt Lake Reds Palace.

That is my greatest collecting exerience. 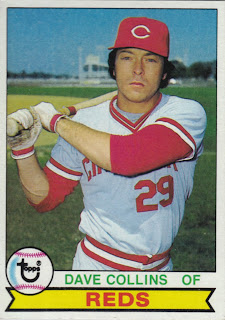 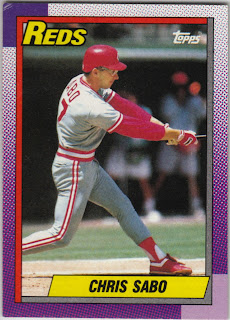 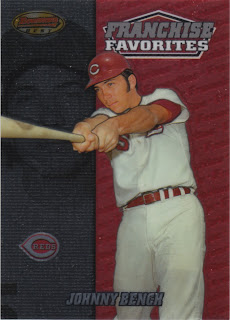 Came across this today:

Answers can be found here.

Hint *A Reds player is the first one* Hint


Looks like the quiz is no longer working. So here it is. You have 8 minutes to name all of the hitters. The date is the day they hit their 3,000th. Some are easy. Some you will have no idea. The main thing is getting the names right.

We haven't had a good Johnny Bench card lately so here it is: 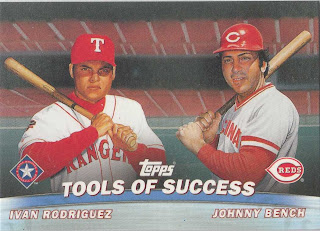 2001 Topps
Topps Combos
TC5 Ivan Rodriguez / Johnny Bench
Every generation has two great catchers fans immediately think of. That is why this card makes sense showing Bench and I Rod together. The 1970's / 80's had Johnny Bench and Carlton Fisk. Thurmon might have had it if not for the plane crash. Both guys are icons of the game for the catcher's position. Bench for being the greatest defensive catcher ever and a master field general with strong bat. Fisk for his historic home run , a gritty, long career and a decent bat. The debate between Yogi and Johnny will always play on but Johnny Bench will always be the best in my books.
Now for Ivan. From the early 1990's until about 2005 it was clearly between he and Mike Piazza for the generations best catcher. Ivan has the edge in game calling with Piazza the edge in batting. Too even for me to call.

A Full Reds Team Set of 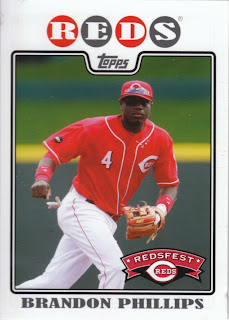 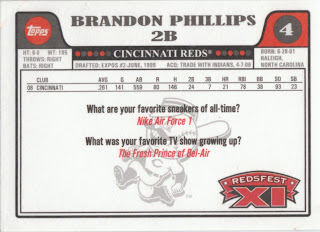 4 Brandon Phillips
This guys is a great guy.
Not only does he like The Fresh Prince of Bel Aire
he models his dives after Jazz getting thrown out of the mansion.
That's AWESOME! 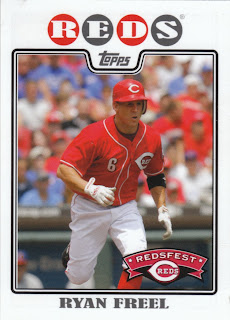 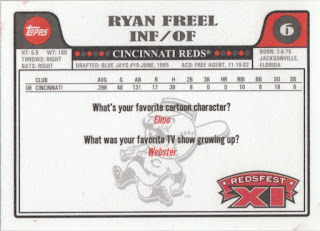 6 Ryan Freel
A great bench guy.
He is like Pete Rose in that he plays almost
every position on the field well.
And he is a fan of Webster? SRSLY? 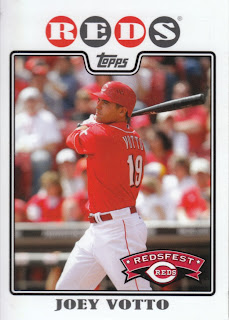 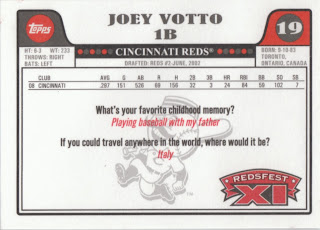 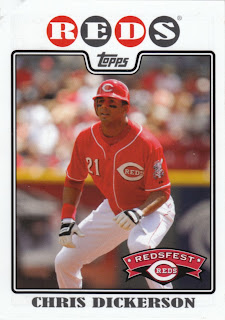 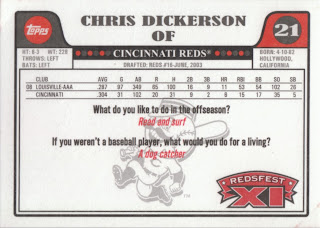 21 Chris Dickerson
Dog catcher? That's funny!
He should be able chase down some lazy pop ups
from that Chicago team in the National League.
That's as close to dogs as he should get this season. 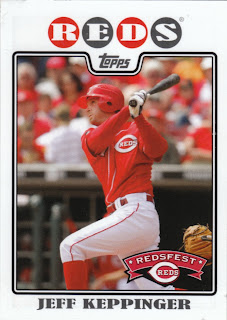 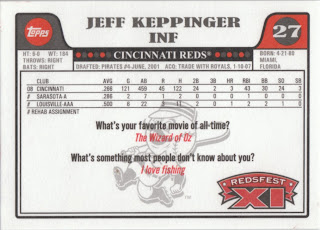 27 Jeff Keppinger
Hopefully we will all be singing
"We're off to see the World Series Trophy"
after sweeping the Los Angeles American League representatives.
I'd even settle for "Ease on Down the Basepath" 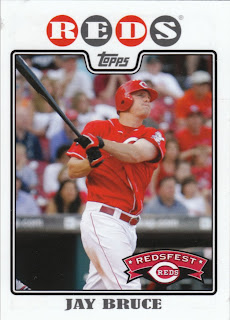 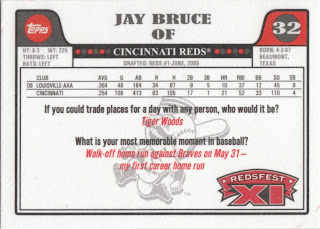 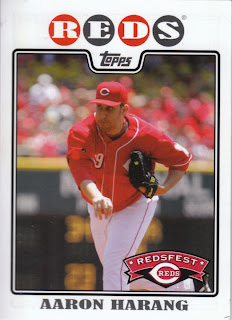 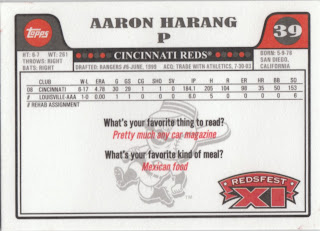 39 Aaron Harang
I bet he has one of those Hot Rod Magazine Visa's
with the flame job background.

He's still having some control problems this Spring.
Thanks Dusty. 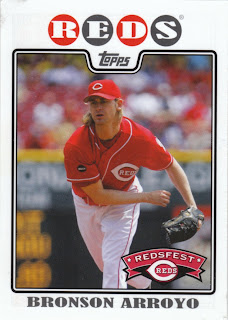 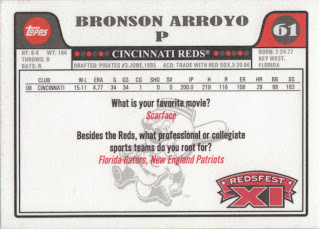 61 Bronson Arroyo
I want to like this guy. But he makes it hard.
On top of being a Gator fan he like the Pats.
Then he has Scarface as his favorite movie.
Add those onto the interview he gave in Boston
this off season where he stated
the Red Sox were a better team and I just can't.
Unless he beats the Mets and Chicago NL team.
Great set of cards as you can see. They came in a little folder with some player info and Redsfest XI info. It just shows that the Reds are the best team in baseball to their fans.

A big thanks goes out to the guys at omgReds.com. Without them I might have never known about this set. But did they send me these nope. They sent them to a Cu... C... Cub...
It hurts to type it.
Cubs fan. I like JayBee, but to send some to a Cubs fan?
That's like a Yankee fan rooting for the Red Sox.
Openly.
While wearing a Jeter jersey.
In Times Square.
Next to Stienbrener.

Quote of the day

One of the few thing Crazy Leatherpants did not mess up while in the 'Nati was the career of Barry Larkin. 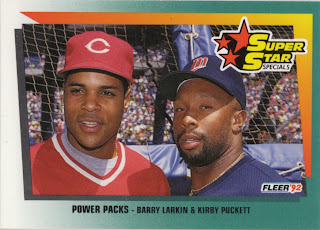 Here we have an ultra rare and
probably never seen by your eyes before
1992 Fleer Barry Larkin with guest star Kirby Puckett subset card.

Two future Hall of Famers on one card?
You betcha!
Barry wanting to sign autos and pet puppies
while Kirby is scoping the ladies? Check!

What a classy guy you are Barry! What a guy!

All I gotta say is what a guy. 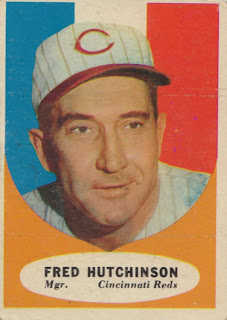 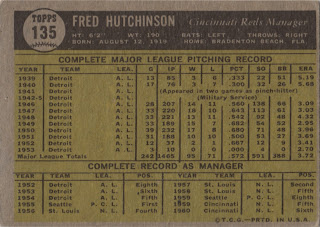 The 1961 Topps card of
Fred Hutchinson
Manager of the 1961 National League champion Cincinnati Reds.
This guy had quite a history.
24 games over .500 as a major league pitcher.
Managed the Reds.
3.72 career E.R.A
Managed the Reds.
Stole Pete Rose's date at the ballpark when Pete was a rookie.
Learned how to get fired from the Cardinals and lead the Reds to the World Series.

Unfortunately, Fred had his baseball life cut short by cancer. He was an architect of rebuilding the Reds farm system in the early sixties that led to the days of the Big Red Machine of the 1970's.

As for the Rose story:
In "My Life Behind Bars" Pete recalls how he managed to show off the crew cut as a rookie during Spring Training to a "more experienced" woman. He brought her to the ball park the next day. Seems Fred had seen her around during the past few Spring Trainings and warned Pete about how he was young and could ruin his reputation and career with a woman like that. Young Rose agreed and promptly sent the lass away. Next afternoon Pete looks up to see a smiling Hutch with balloons on one arm and the lovely young lady on the next. Fred sees Pete staring in disbelief and yells "You're welcome. Don't miss curfew!"
That guy should be in the Hall of Fame for that alone. The only pitcher to make Pete Rose freeze in disbelief.
Posted by Bay Rat North West at 7:55 PM No comments: