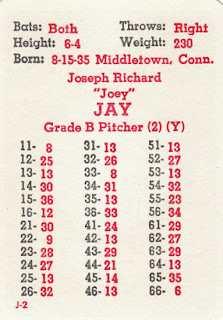 Ah. The 1961 Cincinnati Reds. The strongest team in the National League. 93 Wins vs. 61 Losses. 4 games over the L.A. Dodgers. The team of destiny. They were the team destined to lose to The Yankees. Yep. Those Yankees. The 1961 Yankees. Maris and Mantle. Maris hits 61 Homers.

So here we have a card even the most hardcore collectors may not ever remember seeing. "Joey" Jay was the No. 2 pitcher on the 1961 Reds. But he was the only one to win a game in the world series. He pitched a Complete Game 2 for a 6 - 2 win over the Yankees. In '61 Jay won 21 and lost 10. He was an All-Star pitching selection that year.

Still no clue on the card? Hint: It has rounded corners.

1961 was Joey Jay's first year with the Reds after a December trade from the Braves along with Juan Pizarro to the Reds for Roy McMillan. That was a steal. For the Reds. Jay put together 2 straight All-Star seasons of 21 wins as soon as he came over from the Braves.

About the card. It was an interesting find. Produced in the '80's (I forget when), it is one of the set I picked up at an estate auction. The entire Reds roster from the 1961 World Series is in the manila pack. It gives basic info on the player. Bats: Both (hit or miss, I guess, looking at his .090 avg.), Throws: Right (into 21 wins).
Name, Birth date, etc. Not exactly an eye-catching card. But have you ever seen one? The card itself is made of cheap business card type paper. Like the stuff you can get at Staples and make at home. It was made on a standard 2 color press. Not well-balanced. It is like having a 1957 Aaron with the color from the name bleeding into the photo.

Any idea yet? Here's one last clue. 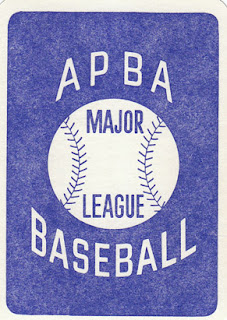 That's right! Stat geeks and APBA Game players might have recognized this right off the bat. I saw the game in the box and thought it would be neat to own and find out how to play. I got it and a Pete Rose Baseball Board Game together for 3 dollars. An 8 year old at the auction (drug in by his Mom) thought the Pete Rose game was "way cool! Something so old (made in 1989)!" so he got it for free. No cards in it so I did not mind. The APBA game came with 2 teams. The 1961 Reds and that team from the A.L. who shall never be named in my posts again. I was very surprised to find them and think how lucky I am each time I look at the envelopes that hold the cards. The sets were only available by mail order after you bought the game. So even though it is not much to look at, it is "way cool" to own. When is the last time you even thought of one of these game cards? So keep up the searches for your team cards wherever you can look. You never know what you will find. I never even knew these were made and how many others didn't?
Posted by Bay Rat North West at 10:35 AM

I have several Indians team sets of APBA, from various years. I always thought they were cool, and now I can pick Tribe teams sets for cheap (the "advantage" to collecting a team that spent much of it's life in obscurity and losses). I am one of the "geeks" that knew from the top picture t was APBA... The benefits of being a collector... :-) Though, "so old" and 1989 can not possibly exist in the same sentence, can they!?!? AUGH!!

I own the game. i have one card set from the 70's that an older friend gave me and a card set from the 80's that I played all the time. I am going to post on my site (at some point) about the crazy nicknames that are on the cards.