Something other than 87 Topps? 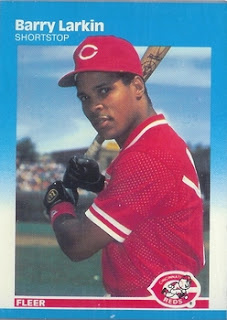 That's Right! A Barry Larkin Rookie Card! And not 87 Topps! Who knew he had any besides 87 Topps?

I like this design. It helps that blue is my favorite color and Barry is my favorite retired player. The faded blue borders remind me of the two tone paint jobs I like on trucks. The name clear as day on top and easily read. He has the look on his face of someone daring Mike Scott for a high breaking ball to hit. Those hands clenching the pine. Ready to excite the blurred out crowd in the back. Those folks probably did not think they would see a slap hitting shortstop win it all in 90 and then a 1995 National League MVP Award.
According to the card back, Barry was destined for a great career stat wise. 1 full season in the minors. .329 Avg. in Denver in 1986 in 413 AB! 136 Hits with 51 RBI and 19 Stolen Bases! No wonder he got that September call up in August. He may have gone 0 fer in his debut but that consisted of 1 at bat that resulted in a ground out for an RBI. The first of the Reds for the game.
I hope you enjoy this good looking and overlooked early card of a 3rd ballot Hall of Famer.

Fact about Barry you may not have known:
He was originally drafted in the 2nd round of the MLB draft in 1982 by the Reds but turned down the hometown team. Was redrafted in 1985 in the 1st by the Reds. Smart move as the time at Michigan matured his playing without a long road through the minors.
Posted by Bay Rat North West at 9:00 AM

87 Fleer doesn't get much love these days, but there are some real gems buried in that set. It doesn't look too bad either.

Barry Larkin was one of my favorite non-White Sox players from that era. I was always hoping that the Sox would land him in a trade.