And now for the rest of our countdown

The last entry into my two days late immortal serial numbered, non game used or autographed card challenge by Reds Super Collector Brads55. As blog creator and all around good guy who only occasionally taunts cute puppies and takes yarn from frisky kittens I feel I shall end on this note. A complete set of Reds 2004 Topps Traded Gold parallel cards. Let us see who is involved in this collection of cardboard idolatry. 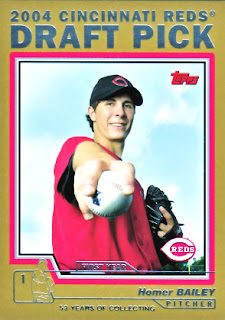 Homer is an interesting kid to watch right now. Is he good enough to be on the big league club's staff. Yes. Does he need a little more seasoning before an early May call up. Yeah. Homer has a lot of hype and the fastball to follow through. Just look at his second call up last year. We look forward to his blazing speed off the mound. 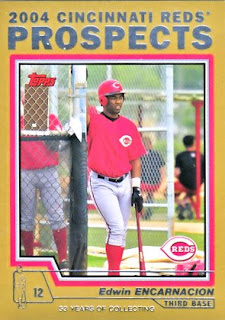 Starting at the coffin corner for the Reds. Has posted good numbers and shown some growth in the field. 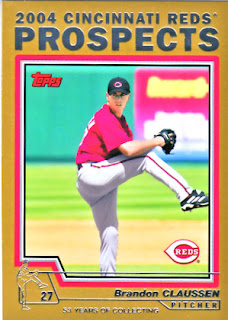 Had an up and down, mainly down, carrer with Reds before being let go. Then picked up by (drumroll please)........suspence mounts.........edge of seat shocker ahead........ Jim Bowden. Now G.M of the Nationals and determined to ruin their system the way he did the Reds. Go! Jim! Go! 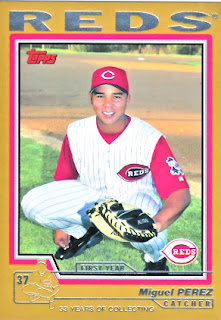 Miguel had a brief call up to the Reds in 2005 but seems to be the Crash Davis of the Reds farm system. He is constantly between rookie level A ball and AAA in Louisville. He has a great arm and strong bat. Just does not make good calls on swinging the bat and is iffy at calling the game. 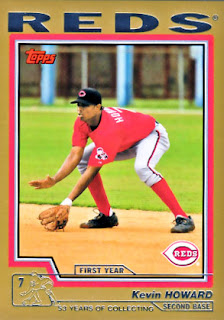 It took me about a year to track down this card. ebay? Nope. Sportlots? Nope. Beckett? Nope. Kid I met in Portland, OR? Yep. How classic is that. A common no one has for sale I find at a card show on the table run by a 14 year old while on my 34 hour break. And the kid GAVE it to me when I told him this was the only Reds card I could not find. I have since sent said table operator an unopened box of 2007 Topps for his troubles. That is what is great about this hobby. People helping people. As for Howard, he never climbed over AA ball with the Reds and is now in the Los Angeles National League baseball team's farm system. At AA level.

And that does it for this weeks immortal serial numbered, non game used and autograph card challenge between Reds Super Collector Brads55 and Reds MASTER Collector Joec73. Get some Brad. Get some.

Very nice set I must admit. But I declare WANK WANK! Aloha, Brad

What the hell did you delete here?

It was one of those click here spam comments.